Is There An Elephant in Your Team Meeting? 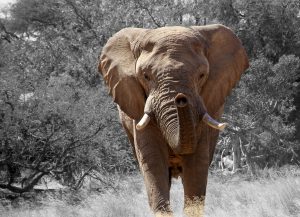 Great teams and team members are just aware of the elephants; they are elephant hunters! They regularly chase them down! They know that the elephants in the room, the unresolved issues and poor communications, are enemies of teams and teaming; they know that untended, they can take the life, fun and motivation right out of the room, and right out of the team. Great team members and leaders are great elephant hunters!

How Much Do Baby Elephants Weigh?

So, learn to be a great elephant hunter. Sniff them out and deal with them swiftly. Sometimes the conflict and dialog produced by the elephant hunting will cause issues and truths to come to the surface that albeit are at first awkward, but are absolutely key to the development of the team, of the church and of their mission.

Elephant-hunting requires a few sharpened skills, among them – candor, confrontation, and conviction. Candor is probably the biggest missing element on most teams. The lack of it keeps so many teams from ever becoming truly great. But, the team that can learn to balance the grace of honor and the skill of candor will find an I incredible “sweet spot” from which to lead and influence others. We will talk more about candor in Chapter Six. But for now, it is important to recognize that candor is full-out honesty; calling the challenge and the conflict for what it truly is.

Confrontation is an essential art for ministering in the age of collaboration. Long gone is the political effectiveness of just being “nice”. The fact is that you will not be able to nice your way through a conflict. Elephants just don’t response to niceness (unless they are Dumbo!). They require staring down and sharpshooting. But, there IS a way to confront them and a way NOT to do so.

Josh McDowell taught me a great approach years ago – he called it the Sandwich Approach to Confrontation. It is simple. AFFIRMATION – CONFRONTATION –REAFFIRMATION. When confronting a team or team member, first you affirm your commitment to them and the value you place on them as individuals. Second, you confront with clarity and absolute honesty. Call the issue and the conflict for what it truly is. Get it fully in your scopes and describe exactly what you see. Then, once the confrontation is communicated, make sure to reaffirm the person or persons you are confronting.

Conviction is the soul fuel required to hunt elephants. It will take some courage, but the more you practice loving (or should I say, honoring) confrontation, the greater ease you will develop. Confrontation is never fun, but hunting elephants actually can be. It can be absolutely invigorating and renewing at times for your team. Clearing the team atmosphere and environment of unwanted “predators” can help fortify the solidarity of your team and team members.