The Trinity & The Teaming Life 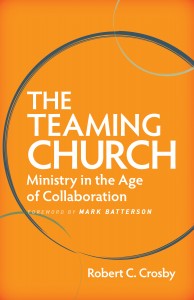 Is there any practical insight to gain from the relationship of the Trinity? Not only does God consist of Three Person, but the Life of God exists in the relationship of the three, The Three. This transcendent model of the trinitarian relationship though not wholly reproducible, may be reflected within mankind in various communitarian interactions such as marriage, family, Christian fellowship, and ministry teams and partnerships. In other words, in the same sense in which man is made in the image of God not in order to reproduce or replicate God’s likeness, but rather to reflect and represent it on earth, so even our ministry teams can be a reflection of the Trinity, or the Divine Community and their collaborations.

We may . . . note two objections that have been raised to the idea of the practical significance of the doctrine. One was posited by the philosopher Immanuel Kant. His objection was on the basis of principle, the idea that a doctrine like this could not make any difference in practice. He said, “From the doctrine of the Trinity, taken literally, nothing whatsoever can be gained for practical purposes, even if one believes that one comprehended it – and less still if one is conscious that it surpasses all our concepts. It makes no difference,” said Kant, “whether we worship three gods or ten, because it is impossible to extract from this difference any different rules for practical living.” The other is from the twentieth-century Catholic theologian, Karl Rahner … He says, “We must be willing to admit that, should the doctrine of the Trinity have to be dropped as false, the major part of religious literature could well remain virtually unchanged.” (Millard J. Erickson, Making Sense of the Trinity; Grand Rapids, MI: Baker, 2000: 69-70)

The essential question that must be considered, however, is not whether the doctrine of the Trinity is relevant to man or to the Church; rather, it is this: Is man and the Church relevant to the Trinity and to this doctrine? Stated differently, the most important consideration is not what will this doctrine do for any individual Christian or particular local church, but, rather, in light of this revelation, how should we conduct ourselves as Christians, as church leaders and as collaborative teams in ministry.

After these considerations, it seems then that the Trinity is a vibrant model for teambuilding in the 21st Century. On one dimension, it is encouraging to rediscover a model of ministry that can provide practical application and amplification to the essential doctrine of the Trinity, something all too rare in modern Christianity. The Trinity has more often seemed far too transcendent a doctrine to apply to human relationships and work. On further reflection, however, it becomes clear that the Trinity is the premier model, or “the master image”, of what Christian fellowship, community and teamwork are to look like for the purposes of edification, evangelization and, ultimately, the glorification of God in the earth.

Jonathan Edwards invested much contemplation into the theme of The Trinity and its application to human life and Christian ministry. He thought the doctrine so essential to life, faith and its practice that he referred to it as “the Supreme harmony” of all truth. Here’s what Elizabeth Pauw found:

Though by no means absent, Edward’s explicit trinitarianism was a prominent theme neither in his preaching nor in the writings published in his lifetime. Its richness remained largely hidden behind the public exterior of his life, emerging more in the privacy of his study and on his solitary rides and walks, than in his Northampton pulpit or in the Edinburgh printing houses … yet Edwards’s Trinitarian reflections provide a strong link between two aspects of his thought that often have seem disconnected: his profound metaphysical musings and his zeal for the church and the Christian life … In a figure as complicated as Edwards, it is unreasonable to expect to discover one interpretive window into all the facets of his life and thought. But some windows are bigger than others … Edward’s trinitarianism provides an unusually wide view of his deepest philosophical, theological, and pastoral inclinations. The Trinity for Edwards was “the Supreme harmony of all, (Elizabeth Pauw, in The Supreme Harmony of All). . .”

Among his notes there exists the writing from Edwards’ pen, written as if he had made a profound discovery. He wrote that “The Trinity is The Supreme Harmony of All…” In other words, amidst all of his Biblical, spiritual and theological contemplations, Jonathan Edwards was telling us that many mysteries of life and relationship find powerful insight in the Trinity that supremely “harmonizes” many of the great questions of life. The Trinity is the Divine Team, the perfect example of a perfect circle of honor, love, collaboration and relationship. God, help us as your Church to become “One” even as you and your Son are one! (cf., John 17)