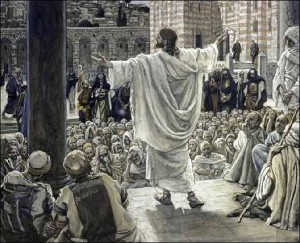 Many remember a time when Jesus stood silent before his accusers; but there was another time, much less remembered, when he actually SHOUTED. He raised his voice above the festal crowd and, but for a moment, the Lion of Judah roared.

Things were heating up in his ministry – miracles, healings, teaching with unprecedented authority, and more. The lines were being drawn.  Decisions were being made. His own brothers had some advice for him. In order to gain more followers, they urged Him to move from the more remote regions (i.e., Galilee) and to take the “road show” to Judea in order to do some public relations work. “No one who wants to become a public figure acts in secret,” they told Him. “Since you are doing these [miracles], show yourself to the world.” (John 7:4)

Jesus, however, was not about to follow their counsel. While they went on to Jerusalem, he chose to stay in Galilee. Not long after, however, he journeyed on his own to the holy city – as John says, “not publicly, but in secret” (John 7:10). A feast was being celebrated and the city was abuzz with controversy. Everyone wanted to know, “Where is that man?” Clearly, he was the talk of the town.

Ultimately, on his own timetable and amidst the annual feast, Jesus did show up. Everyone had wondered if he would come. He came right in the middle of the temple courts and began teaching. Many were amazed at his authority, his teaching and his insight. The Jews asked, “How did this man get such learning without having studied?” (7:14).

My teaching is not my own. It comes from him who sent me. If anyone chooses to do God’s will, he will find out whether my teaching comes from God or whether I speak on my own. He who speaks on his own does so to gain honor for himself, but he who works for the honor of the one who sent him is a man of truth; there is nothing false about him.” (John 7:16-18)

The atmosphere tensing by the moment, the Man of Truth confronted his critics even more clearly as the day went on:

Has not Moses given you the law? Yet not one of you keeps the law. Why are you trying to kill me? (7:19)

In order to appreciate the power and significance of what Jesus said and did that day, we need to consider a little more background of the Feast of the Tabernacles, the event going on at that time in the Jerusalem. This major celebration on Israel’s worship calendar took place about six months before the crucifixion that year. This annual autumn feast was designed to commemorate Israel’s forty-year journey through the wilderness. The last day in particular climaxed a week of celebration. Tents and little shelters were built from branches to house families in order to remember the Lord’s leadership of their ancestors through the wilderness.

Tradition tells us of a climactic event called the “Great Water Pouring” ceremony which was a part of this week of celebrations. At a decided time during the feast, the priests would take huge urns filled with water and simultaneously pour them from atop the temple steps. Just picture it. Gallons and gallons of water would beautifully cascade out of the temple, down the steps and towards the people creating a waterfall at their place of worship. Remembering the significance of water provisions in the barren wilderness brought added significance to this event.

Just as the priests began to pour their urns of water out with synchronistic precision from the top of the temple steps, joy would most certainly erupt among the people in shouts and praises. When the water was poured, it would excite the crowd. The drama ran high as the Israelites lifted up praises to God. Just imagine the excitement the children must have felt. The combination of bold vocal praise to God and the river-like flow of water from the temple were significant; apparently so significant that it was an opportunity Jesus thought too good to miss. As the eruption of the people’s response started to calm, Jesus shouted. The word used here (Gk: krazo) indicates an alarming shout, an exclamation, a virtual scream of excitement. Jesus raised his voice above the crowd:

On the last and greatest day of the Feast, Jesus stood and said in a loud voice, “If anyone is thirsty, let him come to me and drink. Whoever believes in me, as the Scripture has said, streams of living water will flow from within him.”

As the water flowed down from the top steps of the house of worship and poured step over step until it covered some of the sandals of the onlookers, the Lord saw something exhilarating on the prophetic horizon.  He envisioned at time when not just one temple of stone but millions and millions of spiritual “temples” all over the world would be endued with the Spirit of God to the point of an overflow. Out of their very spirits (i.e., “innermost beings”; KJV) a current would come and out would pour “rivers of living water.” Such an inspired thought in the mind of Christ refused to be merely whispered, or merely contemplated; it insisted on being shouted out loud.

Of all the oil diggers in history who have ever struck coveted crude, none of them saw in those moments what Jesus saw in this one. Jesus could see that his life and ministry would ultimately tap a cascading flow of life in his followers and that would cover the planet.

No religious leaders asked Jesus to take part in the “Great Outpouring” ceremony that day. He had not been commissioned by any man to do so. His name was not on the order of worship written out by the scribes and Pharisees. Nor did he ask anyone for permission. He simply and powerfully lifted his voice uninvited and unannounced. He was on heaven’s agenda that day. The announcement was his to make.  It erupted; it poured forth. There was no more appropriate nor meaningful moment for Jesus to prophesy the powerful coming work of the Holy Spirit, of the Day of Pentecost and the events of the Book of Acts, than then and there. Just as John the Baptist had heralded the coming of the Messiah in the wilderness bold and unhindered, so now Jesus was heralding the coming of the Spirit in a most liberated and authoritative manner.

Christ had come to them; the Spirit would soon pour from them.