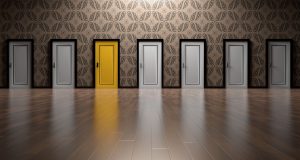 Before attempting the much-rehearsed maneuver, I checked the rear-view mirror of my ’62 Chevy Impala and saw a problem. A car was right behind me on the two-lane country road and, for the life of me, I could not remember anything in the driver’s manual about what to do in that situation.

“What about the car behind me? What should I do” I reluctantly inquired, perspiration beading on my brow.

The official turned toward me and peered knowingly over his wire-framed half-glasses. “Young man, you just do whatever you think is right.”

The knot already in my stomach tightened more. I was 15 and, in my mind at least, this was more than just a driver’s test; it was a rite of passage. My manhood was on the line. Besides, just a month earlier I had failed the road test. This was my second try.

Ahead of me, the road was clear. Next to me, the judge was watching. Behind me, a fellow driver was waiting for me to make up my mind. I saw two choices: One, I could execute the three-point-turn while the driver behind waited, or, Two, I could motion for him to pass and then start the turn. My brain did a rapid search of every sentence in the driver’s manual it could possibly recall, but I found myself in a situation the book had not specifically addressed. How would I decide on something of which the manual was unclear?

Have you noticed that life, relationships and work are full of several situations and conflicts the Bible specifically addresses and others that it simply does not? After all, where is the passage that tells me which quality grade of carpet we need to put in the house and how much to spend on it? What verse will instruct my wife and me on whether we should take our next vacation alone as a couple or together with some friends? Which passage reveals how much time each week I should devote to study and prayer and just how much to rest and recreation?

In ancient Israel, as the people faced moral decisions and dilemmas on which The Torah (or Old Testament) was not specific, the religious leaders added to the law by writing exhaustive extra-biblical requirements in The Talmud (a long list of extra-biblical extraneous rules). These became incredibly burdensome loads over which Jesus accused them of being “blind guides”, of straining at “a gnat” and swallowing “a camel” (Matt. 23:24); Of majoring on the minors in life. In doing so he said they had neglected “the more important matters of the law—justice, mercy and faithfulness (v. 23).” While turning their personal convictions into sweeping codes of expectation for others, these leaders had missed the importance of values-driven decision making and, along with it, the way of wisdom.

Good choices and decision-making calls for something more than an exhaustive collection of rules. The best leadership decisions are also the wisest ones. Ultimately, the reason we do have rules is because so often we do not have wisdom (“If anyone lacks wisdom, let him ask of God.” – James 1:5).

Think about it. From where do God’s principles and guidelines proceed? Ultimately, they flow from God’s character, his nature. In other words, God doesn’t need rules to function because He has something better; he has perfect character and therefore perfect wisdom. His decisions flow from who he is. Since he bears the intrinsic quality of pure wisdom, he does not require the extrinsic motivations of rules and consequences.

But, as workers, leaders and Christ-followers, how are we to know the way of wisdom … especially in those split-second, “three-point turn” decisions of life and ministry? In those decisions we face of which the Bible may not be clear; how can we be clear? An easy-to-miss passage in James reveals a matrix of 7 characteristics of wisdom that serve as practical “checkpoints” for making better decisions this year. In the next Teaming Life post (Making Better Decisions This Year – PART 2) we look at “the two kinds of wisdom” described clearly in the Bible and the Biblical Matrix that shows us how to make better decisions.

Robert Crosby is co-founder of Teaming Life (http://teaminglife.com) and Professor of Practical Theology at Southeastern University. In addition to training pastors and speaking at conferences, he and his wife, Pamela, have written several books including The One Jesus Loves (Thomas Nelson) and The Teaming Church (Abingdon Press). Follow them @teaminglife