Marriage is a “Mystery” 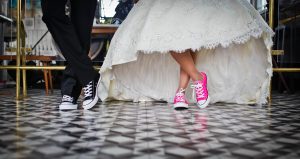 Mysteries are intriguing. In fact bookshelves, Netflix files and bestseller lists are full of them. They capture our attention and call us to consider. When the Apostle Paul describes the roles and relationships of wives and husbands in the Book of Ephesians, he paints a picture of some of the significance of marriage, of the relationship of a wife and a husband (Eph. 5). But, while he describes and defines some of the intended purposes and spiritual significance of those roles, he says something unforgettable, in just five words; something that should set us free to think, ponder, wonder and imagine more about marriage than ever before. Here it is:

“For this reason a man will leave his father and mother and be united to his wife, and the two will become one flesh.” This is a profound mystery—but I am talking about Christ and the church. However, each one of you also must love his wife as he loves himself, and the wife must respect her husband. (vv. 31-33)

“This is a profound mystery.” The original word (Gk: mysterion) means “a hidden purpose or counsel; an insight not available to the untaught or uninitiated; something not obvious to the understanding; something not understood by the ungodly.” The same word for “mystery” is used when Jesus said, “To you it has been given to know the secrets of the Kingdom of heaven …” (Mt. 13:11). Paul also used this word when he said “We impart a secret and hidden wisdom of God (1 Cor. 2:7).”

So, let’s ponder, explore and consider the “mystery”, the mystery of a man and a woman, the mystery of marriage. The writer of Proverbs did so. Just listen to his words:

“Three things are too wonderful for me;

four I do not understand:

the way of an eagle in the sky,

the way of a serpent on a rock,

the way of a ship on the high seas,

and the way of a man with a maiden.”

Before these thoughts were written down they were pondered in the mind of a man. He was, in fact, fascinated and caught up with the concept of The Way, the “way” of connection that emerges between a man and a woman. Even though he considered the wonder of this magnetic connection as something “too wonderful for [him]” and something he could “not understand” he still wrote of it, nonetheless.

Since the writing of Proverbs 30, research and science have helped us learn much more about the physics of eagle flight, the biology of serpentine movements, and the technology of shipbuilding and design. Also, much more has been revealed about marriage, through research and revelation. The mystery calls us to consider the wonder and the workings of it to this day. Throughout the rest of this book we will endeavor to be more aware of the wonder.

Revelation – Foundational to a Christian’s understanding of marriage is what the Bible reveals about it. Not only does it provide insights into the purpose of marriage and the rationale behind it, but also it does so with great clarity and certainty. Such as, “For this reason a man will leave his father and mother and cleave to his wife (Gen. 2:24; Mt. 19:5; Eph. 5:31).” Some things about marriage are revealed through the Scripture.

Observation – Our own experiences in life, the relationships between men and women, and marriage teach us much about their nature, their complications, and their potential in our lives. Additionally, countless studies on marriage warrant our consideration including a few we will consider from the extensive long-range research by specialists such as Dr. John Gottmann. Also, there are fascinating insights from the world of nature, including the most interesting sex life of the porcupine (more about that in Chapter 14). Some things about marriage can be observed through science.

Imagination – While the Apostle Paul provided some general directives and guidelines for husband and wives (Ephesians 5:15-33), the “profound mystery” designation invites us to ignite our imaginations as to the ways that God’s will for marriage may reflect his glorious loving nature to our families, friends and to the world around us. Some things about marriage wait to be imagined through our faith and personal experience.

Many try to turn marriage into a simple method with strictly prescribed roles that are often more tied to social expectation than Biblical revelation. While some have tried to reduce Paul’s admonitions to a strict set of outdated rules. Without any depth of consideration or imagination, they misread and over interpret his words to men and women to “submit to one another”, to “submit to your husbands” and to “love your wives.” While we are tempted to relegate them to a rigid method to be preached, Paul says they are a profound mystery yet to be considered and lived out.

What are some of the “mysteries” of marriage you have discovered so far?