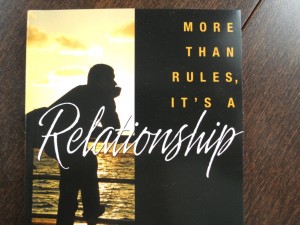 Mine was a test of endurance. The pew was hard; the clock, slow; the mind was wandering; and the scene, all too familiar.

It was ten minutes after eleven on yet another Sunday morning. I was right where I had been told since my earliest years I was supposed to be at that time of the week. And, for the life of me, I could not figure out why.

Ironically the one “well” in my life that was most often coming up dry was my religion. Other places of refreshment that I was accustomed to frequenting all seemed quite faithfully to quench my thirst, for the moment at least. When friendship was lacking, my neighborhood buddies were usually around. When things started to get dull on weekends, our television or the local movie theatre usually had something to busy my mind. When life lacked a competitive edge, there was usually a pick-up football or baseball game to be enjoined just a house or two down the street. But when purpose and meaning in life began to elude me, my religion seemed to serve up the same old stuff – unfortunately, most of it as dry and bland as the factory-processed wafers on the communion table. A predictable environment filled with monotone voices, placid expressions and shallow platitudes; nothing to write home about.

To me, my religion was just a place to go, but where was the purpose? What was the reason? Was it for guilt’s sake or God’s sake? Was church just a place I was supposed to clock in and out of … to keep God happy … or was there something more? My religion had served up lots of words to me over the years, but it had left me wondering and wandering still. In a world full of life, color and variety, it always felt so staid, bland and tasteless – black and white in a multi-colored world. It was, or at least felt to be, the least alive place in my world. It was a place, for some odd reason, that I felt good about having gone to, but rarely did I ever feel really good about being there. I didn’t want to admit it, but I was already worn out on religion. . .and I was only fifteen.

Worn Out On Religion

I am convinced that many people today are worn out on religion – plain and simple. We are up to our ears in it. We hear of one religion battling another in the name of their “god”. We read of a radical group who believes they will attain a high entrance into heaven by an act of terrorism against “pagans.” We watch priests wear robes carrying out rituals one day and facing indictments the next. We turn on talk shows to hear one religious leader slamming another. Our increasingly pluralistic society has also become increasingly religious. Have you noticed?

One person tells us that his religion is the only “true” one and that all others are “false”. Another person appears on Oprah and tells us that every religious leader who believes that his way to God is the only way is out to lunch. Even Oprah affirms that she believes there are many “diverse ways leading to what you call God.”[i] Today’s conventional wisdom says that religion is good, but that too much of it is no good. We are told that it is good to believe there is truth in your religion, but don’t believe that your religion is the only true one. That’s just considered to be a bit too much “belief.”

The fact is. . .Religion leaves me wanting. I don’t even like the word anymore. And my frustration is nothing new; many people feel it. As a matter of fact, throughout the centuries many others have also found themselves worn out on religion. Boston’s own John Adams, one of America’s founding fathers, early in his career even considered going into the ministry. He changed his mind however when he observed the local church services and what he described as the “fierceness of disagreement so inherent in the religion of the time”. He found a great conflict between the complex demands of the church and the simplicity of the Gospel.[ii] In his own words, he asked the question (1756):

Where do we find precepts in the Gospel, requiring . . . Convocations, Councils, Decrees, Creeds, Confession, Oaths, Subscriptions and whole Cartloads of other trumpery, that we find religion encumbered with in these days?[iii]

Clearly John Adams was worn out on religion in his day. Yet, as his words reveal, it wasn’t the Gospel (i.e., “Good news”) God had given that turned him off, but all the “accessories” (i.e., “trumpery”) men had added to it. Wisely, Adams knew the Scriptures well enough that he could differentiate between the inspirations of God and the perspirations of men, between human notions and divine intention.

Interestingly enough, the people who resisted Jesus and his teachings the most in First Century Palestine were not the pagans or even the Romans. No, his staunchest enemies were the most religious of the day. You might say the most formidable foe he faced was not the devil in the wilderness but religion (and what I call religiosity) in the minds of the “righteous”. A closer look at the Gospels is proof enough. His greatest conflicts clearly were with the religious and his strongest language was reserved for them. Ironic, isn’t it, that the most avid practictioners of religion of the day seemed to have had plenty of room in their lives for rules and rituals, but no room for the Son of God? Is it any different today?

Jesus, his words and example, cut through a veritable religious jungle of do’s, don’ts, regulations and rituals. The Pharisees of Jesus’ time were, for the most part, a “self-righteous” ruling class who liked to wear their religion outwardly via robes and rituals and rules that brought attention to their personal piety.

Jesus wasn’t fooled by their outward show of religiosity. He accused them of making faith harder than it had to be. Jesus, in fact, said to them: “…how terrible it will be for you experts in religious law! For you crush people beneath impossible religious demands, and you never lift a finger to help ease the burden (Luke 11:46).”

The Pharisees seemed to enjoy pointing out people’s sins and making them feel guilty. Jesus, however, made it clear that his primary purpose was not to make the people feel more guilty, but to set their souls free by saving them from their guilt. The religious were good at making people’s loads heavier; Jesus was determined to lighten them. He put it this way: “Come to Me, all you who labor and are heavy-laden and overburdened, and I will cause you to rest. [I will ease and relieve and refresh your souls.]” (Matthew 11:28 Amplified).

The Sadducees were in many ways similar, but they did not believe in a resurrection. The Zealots, like several groups today, were activists and radicals. They were convinced that, in the name of God, fire must be fought with fire. In their minds, Roman oppression wouldn’t be prayed out; it must be forced out.

The Romans, on the other hand, were out to Romanize the entire world. Their religion was woven into their culture. It was an ancient type of secular humanism. It was also as political as it was religious. The Roman’s gods were their Caesars along with several super-human mythological figures. Amid their gods and goddesses, icons and idols, the Romans felt they had one up on those around them. They saw themselves as the ultimate bearers of the doctrines of tolerance and sophistication. When they captured a new culture, they just added the local religious idols and relics to their Pantheon and proceeded to indoctrinate the people of that culture into their hybrid form of religion and social structuring (i.e., they called the process Pax Romana).

Into this religiously pluralistic world Jesus brought and taught a message that was confident and clear. He spoke for God and made it clear that faith is more than a system of rules – it is a relationship with God.